SEMINARIAN MICHAEL NGUYEN - JUST WHAT THE DOCTOR ORDERED FOR OUR COMMUNITY! 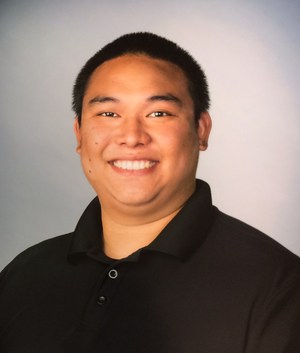 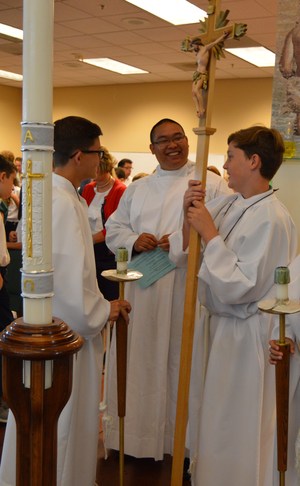 A Young Man's Journey from Biology to Theology
A WOLF News Student Report by: Emily E.

When students attend future school Masses, they might see a new face standing behind the altar. That's because Seminarian Michael Nguyen, 26, has recently joined the parish of Santa Clara. Now that he's here, he wants to form a strong connection with the parish and students.

"I just want to get to know and have fun with you guys," says Michael. To get to know a little about him, WOLF News interviewed Seminarian Michael to learn about his colorful history. Like the students of SFA, Michael has led a very Catholic life. He's had experience as an altar server, he played piano for masses, and he would teach bilingual religion classes to children on Saturdays. Even with all his religious background, Michael didn't always consider becoming a priest. He studied at UC Irvine to become a doctor, and he majored in biological science. "I was a sickly kid," he said, "so I often went to doctors and they always made me feel better. And so having experience with the hospital made me want to become part of it to help others get over their own sicknesses."

After three years of studying at UCI, though, he transferred to a seminary in Mt. Angel, Oregon. When applying for medical schools and helping at the hospitals, he remembers it just wasn't enough. He prayed to God and asked him what he should do, and he was finally given a response. When praying before a Mass, he hears a voice that he claims to be Mary. On that day, Mary told him that being a doctor would mean healing people's physical ailments, which is a good thing, but she wanted him to care for people's spiritual ailments by becoming a priest. Realizing that his love for God was more important to him than becoming a doctor, he began his path towards priesthood.

Taking a job as an intern, Seminarian Michael has found his way to Santa Clara. He has been here for less than a month and he can tell he will feel at home here in Orange. "Everyone was so welcoming," he said, "My first time here, I was shaking people's hands at the parish and everyone said how loved and welcomed I was. And then St. Francis, their first mass, kids were shaking hands, high-fiving, it was very welcoming, I couldn't think of another way to say it." However, transitioning into our parish will present Michael with hardships no matter how welcoming we are. The opportunity to live like a priest with Father Fred meant leaving the seminary in Rome, where he had previously been continuing his studies. "The hardest part was definitely leaving my friends behind, because there were 250 guys back at the seminary that I got to really know," Michael said.

Despite the challenges, Michael is looking forward to the fun experience he will have here. He has many goals he hopes to reach by the end of the year. "Overall, just forming good relationships, because one day I will be serving the people of Orange, which is also the people of Yorba Linda," Michael explains. He wants to have fun with us, go to our sport games, hang out at lunch, just being our friend. Becoming a better preacher and being comfortable talking to a large crowd are also a few things we can help him accomplish.

Like the seminarians who came before, though, Michael won't stay in Santa Clara forever. Around the month of June, his internship here will end and he will resume his studies back at the seminary. "So far, I've only been here for three weeks, but everyone is so welcoming, I really feel part of the family," said Michael, "And to have to leave at the end of the year is gonna be really hard for me." Without a doubt, Michael will leave our parish as a more experienced preacher and a friend to each of us. When he leaves, we'll be guaranteed the fact that he will keep his experience with us in his heart as he continues to become a priest. In the time we still have together, Michael will surely develop from being a new face at Mass to one we will recall with familiarity and fondness.