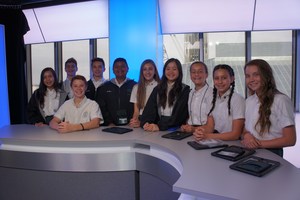 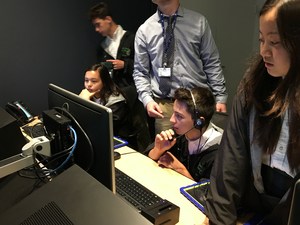 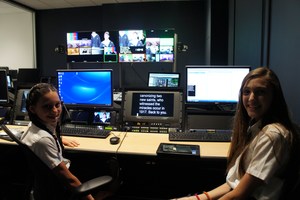 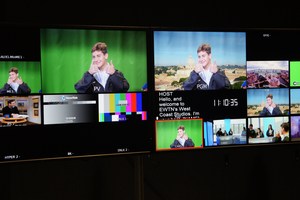 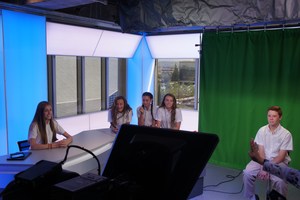 EWTN is the largest religious media network in the world with 11 networks that broadcast in multiple languages 24 hours a day, seven days a week to over 268 million television households in more than 145 countries and territories.  During the visit, the team of 10 middle school student learned about EWTN’s global reach and the network’s mission to spread the good news of the Gospel. They also gained valuable real-world experience in front of the camera and behind the scenes in the control room.

Each reporter practiced their craft on the EWTN set, taking cues from professional television producers, reading from teleprompters, modifying lighting, and learning about the time, talent, and collaboration required to complete a successful show.  Students also benefitted from opportunities at the controls where they counted down to cue producers in the studio, operated teleprompters, and were introduced to the many different roles and responsibilities of a production crew.

“My favorite part was seeing the control room and all the equipment it takes to run a news program,” said seventh grader, Elizabeth H.  “There are so many people working together to make things look easy.”

The goal of the WOLF News program at St. Francis is to develop the next generation of media professionals by providing a platform for students to write and produce a weekly broadcast and by connecting them to local news stations, mentors and role models in their community.  The high quality, religious focus of EWTN’s programming is a fitting example for students at a faith-based learning institution.

“I had no idea that EWTN could reach so many people,” said WOLF News reporter, Jade H., who also holds the position of Religious Affairs Representative on the school’s student council. “It was impressive to think that the people we met produced television shows about God’s word and their message goes all over the world.”

“WOLF News is a new program at St. Francis.  The hope is to build skills that translate to other areas of life for our reporters,” said Allison Clewett, St. Francis Communications Coordinator and WOLF News Advisor.  “We want to transform their understanding of news, inspire civic engagement, and generate a life-long interest in current events.”

In addition to announcements about school activities, the first season of WOLF News has highlighted the meaning of Lent, emphasized the importance of taking care of the planet on Earth Day with a story on the school’s Garden Club, drawn attention to the importance of community connection with a feature on alumnus turned science teacher, Kevin McKay, and provided examples of positive character traits such as perseverance and gratitude.

With the belief that student-centered learning builds critical thinking, problem-solving, teamwork, and communication skills, advisors are excited about the future of the WOLF News program.