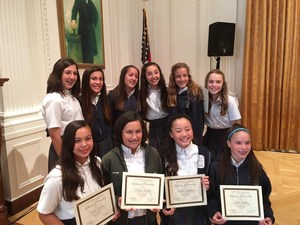 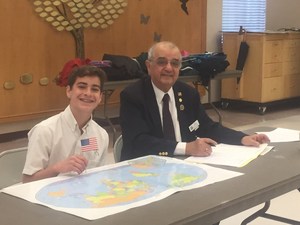 Students from St. Francis along with students from six other local middle schools spent a great deal of time preparing for the rigorous exam.  They were given a packet in November with a world map and a sheet listing about 332 geographical terms and locations.

“The hardest part of preparing for the test was the amount of information we had to remember, and not knowing exactly what we were going to be asked,” shares seventh grader Grace F.

“Memorizing the amount of information the test requires is a difficult task for any seventh grade student, but with discipline and consistent practice it is entirely achievable,” asserts Saint Francis of Assisi social studies teacher, Ann Cooper.  “It is a worthy subject for students to learn.  Understanding where history has occurred and current events are taking place provides a better picture of how the news of the world affect us.”

“At the awards ceremony they told us that we knew more about geography than 99% of the people in the world,” states seventh grade award winner, Brooke E.  “I think it is neat that we learn all that information.  My dad and I play an app called ‘Name that River’ and I can beat him at it now.”

The program is sponsored by the Library's 182-member Docent Guild and the tests were administered on school campuses by the Guild's Geography Committee in February. Students were honored for their outstanding performance on the test if they could answer 30 or more questions correctly.  16 St. Francis students received Certificates of Distinction for perfect scores.